The U.S. Census Bureau released new state-level population estimates—for July 1, 2015—on December 22. The Bureau estimated that Wisconsin's population grew by only 11,900 people from the previous July 1, the lowest single-year increase since 1986. 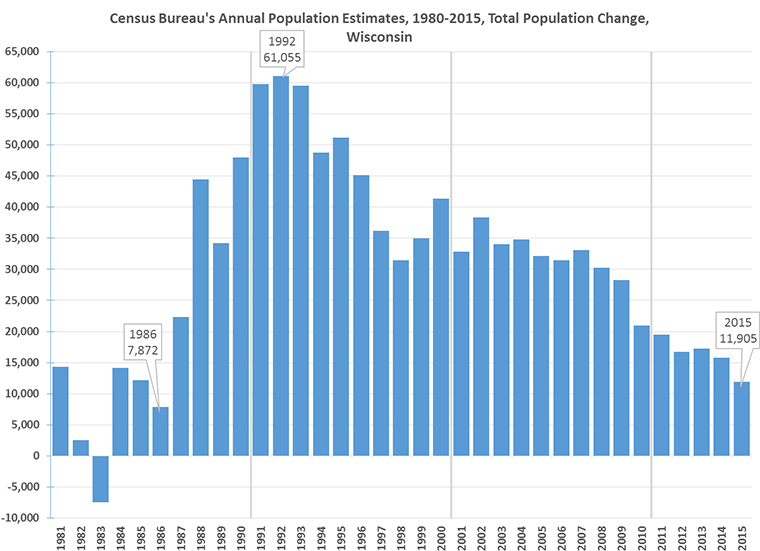 Since the 2010 Census, Wisconsin's annualized population change, in percentage terms, ranks it 39th among the states and the District of Columbia. This recent change compares unfavorably to the 1990s and 2000s, when Wisconsin’s growth rank was 29th and 34th respectively.

What has led to this drop in population increase for Wisconsin? 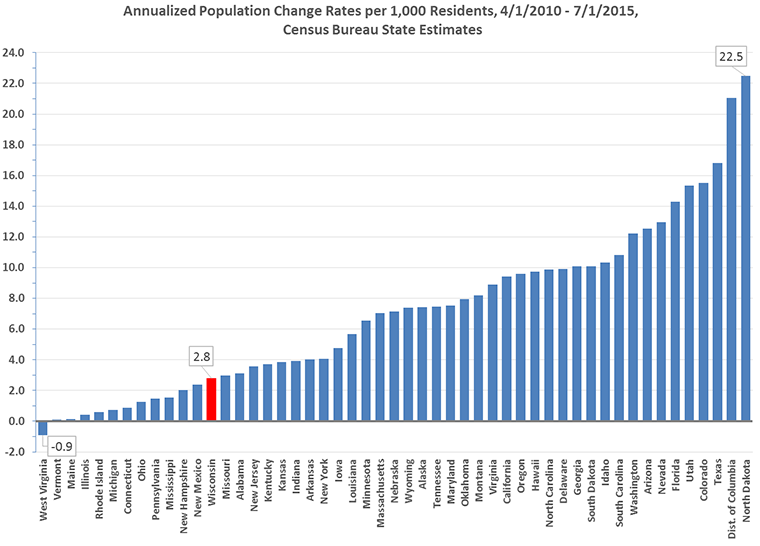 The Decline in Domestic Net Migration

The leading reason for Wisconsin's slow population growth is that domestic (interstate) migration has not recovered since the time of the 2007-09 Great Recession. In fact, it has worsened over the past few years; since the 2010 Census, the state has experienced an average annual net outflow of 10,000 domestic migrants. 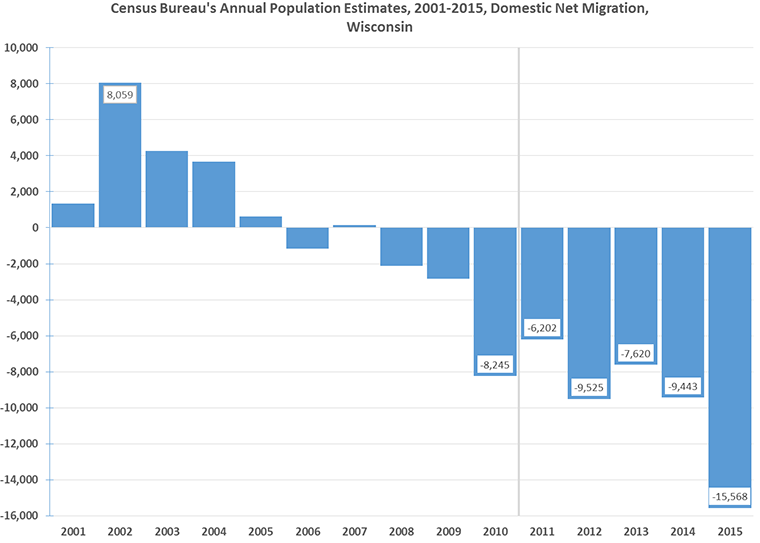 This pattern of loss to other U.S. states, about -1.74 per 1,000 residents since the 2010 Census, places Wisconsin 36th among the states and District of Columbia.

Wisconsin is the recipient of some international migration, but in recent years this flow has not been adequate to offset the larger domestic outflows. Wisconsin has about 2% of the country's population but its international migrants are generally only about 0.8% of the national total. 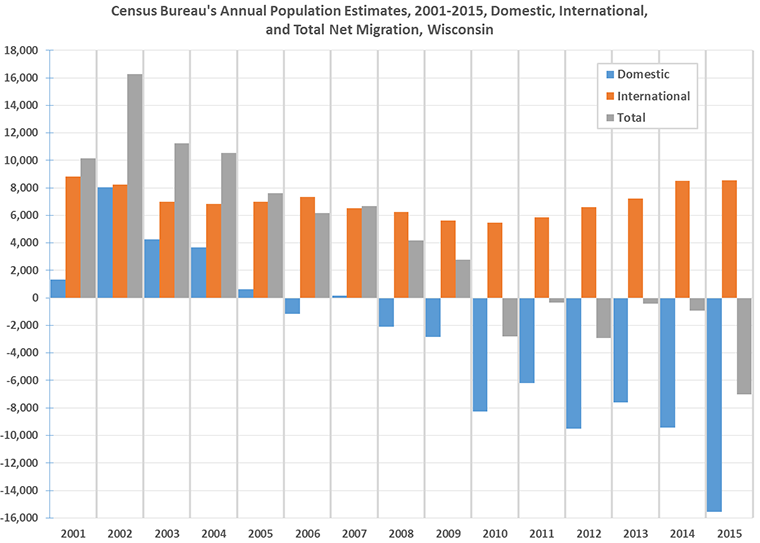 Given its recent domestic migration losses and modest international gains, Wisconsin's net migration rate since the 2010 Census ranks 41st among the 50 states and D.C. 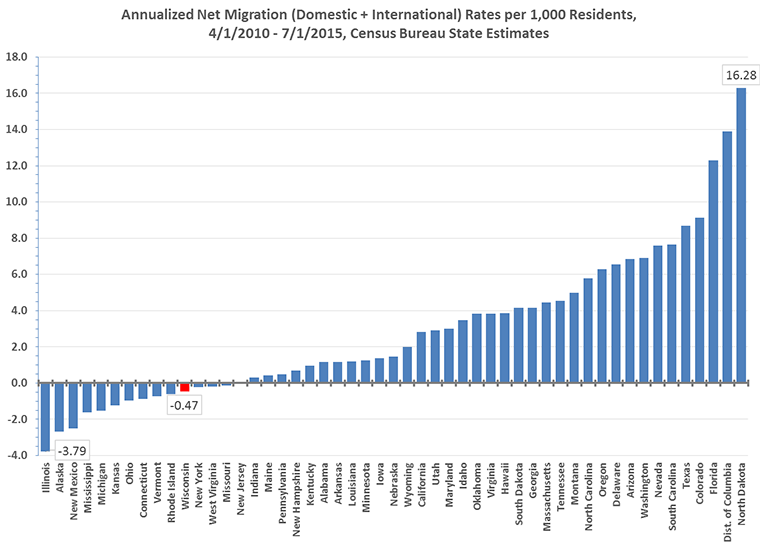 Another factor contributing to the descending pattern of Wisconsin's total population growth is the slowdown in natural increase, the difference between births and deaths. From the peak year of 2007, natural increase has declined by almost 8,000 at 2015. 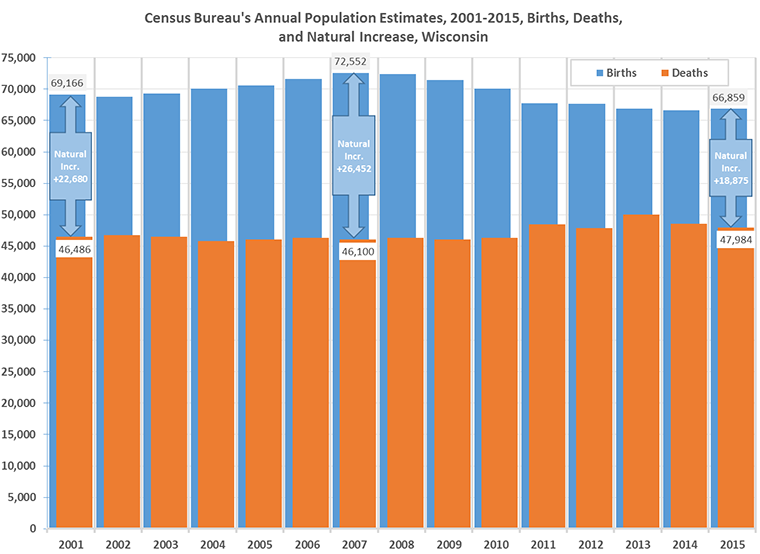 The main reason for the decline is that births have fallen since the 2007-09 Great Recession period and have not returned to the levels seen in those years. Since the 2010 Census, Wisconsin's birth rate has been 39th among the states and D.C. 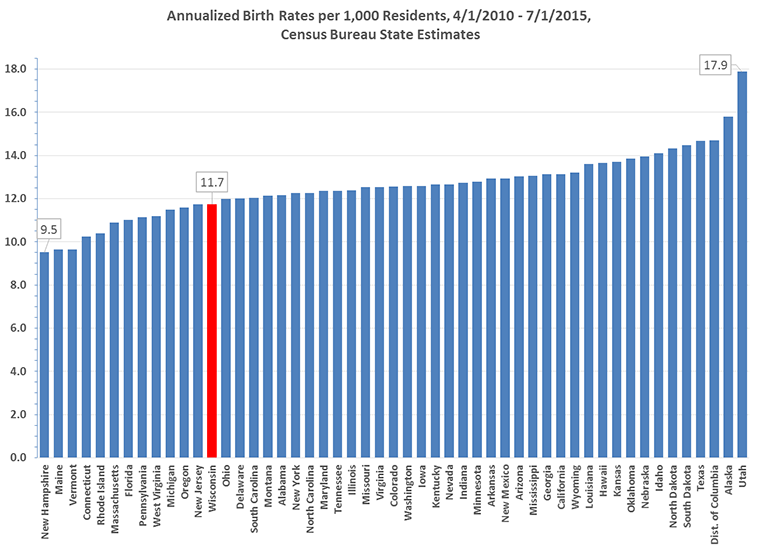 Wisconsin is facing a "double squeeze" in demographic patterns: increasing net outflows of interstate migrants and declining natural increase. Furthermore, as a relatively low recipient of international migrants, Wisconsin has not experienced a gain in total net migrants since 2009.

Produced by the Applied Population Lab, UW-Madison, on 1/4/16 • Privacy Policy
The APL is an applied research unit in the Department of Community and Environmental Sociology