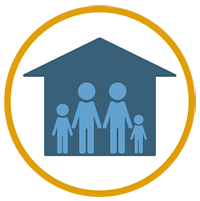 Poverty1 is a major risk factor for social, emotional, and health issues including food insecurity, housing insecurity, violence and crime victimization, incarceration, depression, and chronic disease. In this data brief, we report on new poverty data from the US Census Bureau.

The numbers reported here are averages across two non-overlapping 5-year data collection periods: 2005-2009 and 2010-2014. We use these 5-year period estimates because they are more precise than 1-year estimates, and data are available for all counties in Wisconsin.

Poverty Increased To Its Highest Level In 30 Years

Although 46 out of the 50 states in the nation saw a significant increase in total population living in poverty between the 5-year periods ending in 2009 and 2014, poverty increased more dramatically in Wisconsin than in many other states. The number of people living in poverty reached 13% across the 5 years ending in 2014—the highest poverty rate for the state of Wisconsin since 1984. 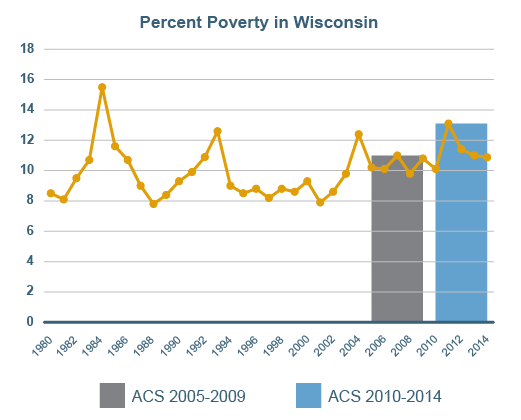 5-year averages shown here are based on the US Census ACS 5-year estimates for periods ending in 2009 and 2014. The historical annual estimates are from the US Census Current Population Survey, available at https://www.census.gov/hhes/www/poverty/data/historical/people.html

This chart was updated 2/26/2016 to correct a minor error. The original version of the chart erroneously showed the poverty rate from an alternative data source—shown in the yellow line—for 2014 at 13.5%. The correct value, shown here, is 10.9%. Since our focus here is on the American Community Survey poverty estimates—shown in the blue and gray bars—this error does not change the findings presented in this brief.

Poverty in the 2010-2014 period increased significantly in 31 of the 72 Wisconsin counties, including 11 of our 15 most populous counties. No county had a significant decrease in poverty. About 738,000 Wisconsin residents are now living in poverty, up from about 605,000 in the 5-year period ending in 2009. 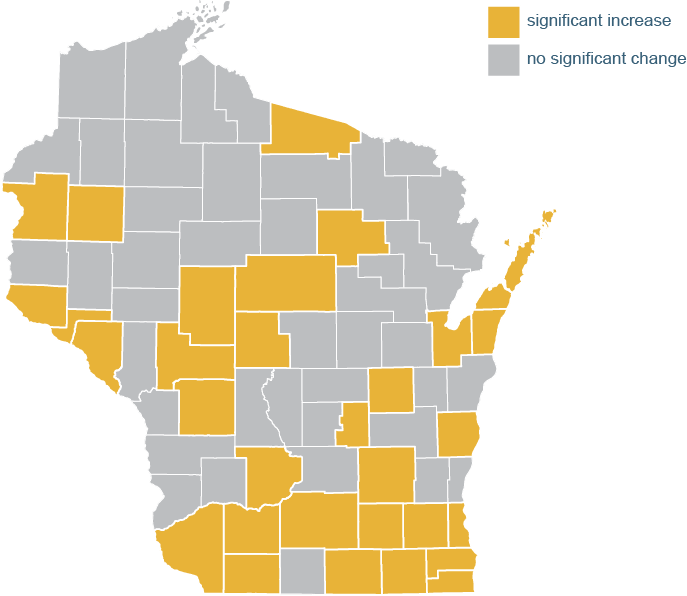 Nearly One In Five Children Are Now Living In Poverty

Over 2010-2014, nearly one in five Wisconsin children were living in poverty—239,000 children in all, or 18.5% of all children. That's up dramatically from the 14.6% of kids who were living in poverty in 2005-2009, and it represents an additional 50,000 children at risk for food insecurity, housing insecurity, poor educational outcomes, and lifetime disease risk due to poverty. Among all the states, Wisconsin ranks 20th on the prevention of child poverty. However, between the 5-year periods ending in 2009 and 2014, only 10 states had faster rates of increase in child poverty than Wisconsin.

Racial Disparities In Poverty Are Bigger In Wisconsin Than In The US As A Whole, And Are Growing Faster 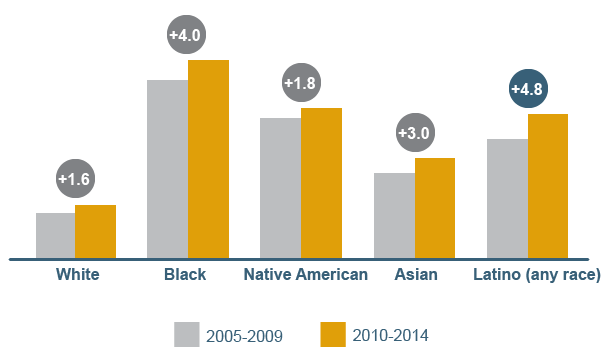 Changes between the two periods are shown in percentage points.

In the 5-year periods ending in 2009 and 2014, significant increases in poverty occurred among Whites, Blacks, and Asians in Wisconsin. Poverty also increased among Native Americans, but the population size is too small for this increase to be statistically significant. Although Blacks are more broadly affected by poverty than any other race/ethnic group in the state, the largest relative increase in poverty occurred among Latinos.

Not only are disparities greater in Wisconsin, they are increasing over time at a faster rate than for the nation as a whole. For example, the gap between Blacks and Whites increased from 26 to 28 percentage points in Wisconsin, but the gap between Blacks and Whites held at 16 percentage points at the national level. The Latino-White gap increased from 14 to 17 points in Wisconsin, but rose only slightly from 14 to 15 points nationally. 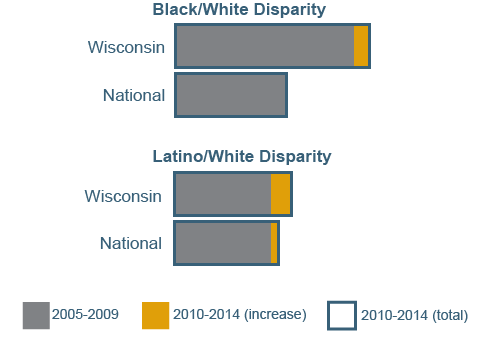 Poverty Increased Across Every Level Of Educational Achievement

Significant changes in poverty occurred among adults at every level of educational achievement. Poverty among those with no high school diploma increased from 20.5% to 24.5%, but the impact was mitigated by a decrease in the total population with very low education, down to 337,000 adults from 380,000. Poverty increased among high school graduates with no college education from 8.9% to 11%; among those with some college from 6.6% to 8.9%; and among those with a bachelor's degree or more from 3% to 3.6%.

Poverty Increased Among Both Unemployed And Employed Adults 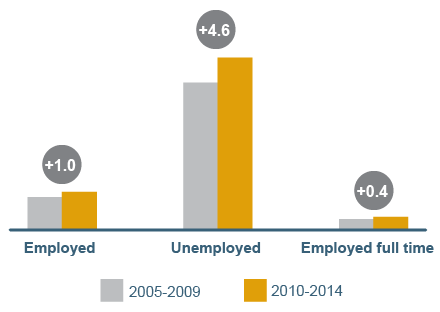 However, poverty also affects working people. Even among adults who worked full-time for the entire previous 12-months, poverty rates were higher in the 2010-2014 period.