Immigration has consistently been a major focus of national media attention in recent months, owing in part to President Donald Trump's controversial campaign promises and subsequent policy moves to limit immigration. These policies include new travel and immigration restrictions for nationals of certain Middle Eastern countries and proposed expansion of the physical wall at the United States border with Mexico.

In this report, we present historic trends and current conditions related to the foreign-born population of Wisconsin. Our purpose is to provide useful state-level background data to inform policy and opinion here in Wisconsin.

For clarity, we offer the following brief definitions for terms used throughout this report:

Recent and Past Trends in Immigration 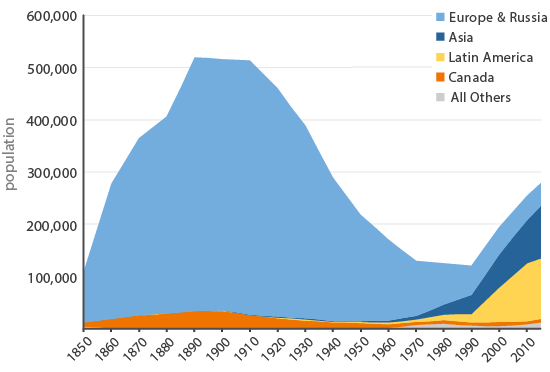 Over the last quarter of a century, Wisconsin has experienced rapid growth in its foreign-born population. In 1990, census figures showed the foreign-born population at about 121,500; in 2015, that number had increased to nearly 279,000. This represents an increase of 130% over the 25 year span.1,2 Nevertheless, a longer view underscores the fact that Wisconsin's foreign-born population peaked over a century ago in 1890 when an estimated 519,000 foreign-born people resided in the state (Figure 1). This earlier peak was part of the "great wave" of immigration that occurred prior to World War I.

For nearly 150 years since the time of statehood, the Wisconsin's foreign-born population was predominantly people born in Europe. Large migration streams arrived in Wisconsin from Germany, Ireland, Poland, and Northern Europe. Even today, 40% of the 5.8 million Wisconsinites who report national ancestry on their Census forms report German descent.3 A total of 18% report some combination of English, Scottish, or Irish ancestry, and 9% report Polish.

The aging and eventual mortality of earlier waves of European immigrants coupled with more recent increases in migration from Asia and Latin America produced a sharp decline in the share of the state's foreign-born that came from Europe (Figure 1). So, in addition to reversing a decades long decline in the foreign-born population, growth in the last three decades is distinguished by the increasing diversity in terms of people's region of birth.

Beginning after 1970, Wisconsin experienced an increase in foreign-born people from Asia then, two decades later, from Latin America. The foreign-born population from Asia consists primarily of people from India and China as well as Hmong refugees (often born in Laos or Thailand) who were displaced and ultimately resettled in Wisconsin after the Vietnam War. The Latin American foreign-born population has consisted primarily of people born in Mexico who migrated to Wisconsin for work, either directly from their home countries or by way of more traditional immigrant communities in other parts of the U.S.

At the same time, the foreign-born population of Wisconsin was diverse in terms of socioeconomic status and many foreign-born residents are not economically disadvantaged relative to the native-born population. Educational attainment is a key indicator that suggests a more complex picture in terms of socioeconomic well-being. While foreign-born people were much more likely than native-born residents to have less than a high school diploma, they were also nearly twice as likely to have graduate or professional degrees (Figure 4).

This concentration of foreign-born people on both ends of the educational spectrum was partly a reflection of varied educational and employment opportunities afforded in the state. Although many foreign-born residents have come to Wisconsin for employment opportunities in jobs that require little formal education, a significant number have also come to pursue employment in well-paying jobs, such as those in medicine and research, that require advanced professional degrees and credentials. Education and professional training is, in itself, another draw for the foreign-born population. The University of Wisconsin-Madison alone had 5,280 international students enrolled in the spring of 2017.7

Similar to educational attainment, the distribution of foreign-born workers across industries showed some stark differences compared with the distribution of native-born workers (Figure 5). For instance the share of workers in manufacturing industries was 26% for the foreign-born population versus 18% for the native-born population. The broad categories below offer a glimpse at some of the differences in the distribution of workers across industries in general; a more detailed breakdown would likely show even larger differences within specific industry types. One example of an industry where immigrant workers were highly concentrated was identified in a University of Wisconsin study which estimated that immigrants comprised 40% of hired workers on Wisconsin dairy farms9.

Wisconsin in the National Context

Although the number of foreign-born people in Wisconsin has increased in recent decades, it remains small relative to most states and compared to the U.S. as a whole (Figure 7 and Figure 8). With only 4.8% of its population being foreign-born in 2015, Wisconsin ranked 35th among all U.S. states (Washington D.C. included). 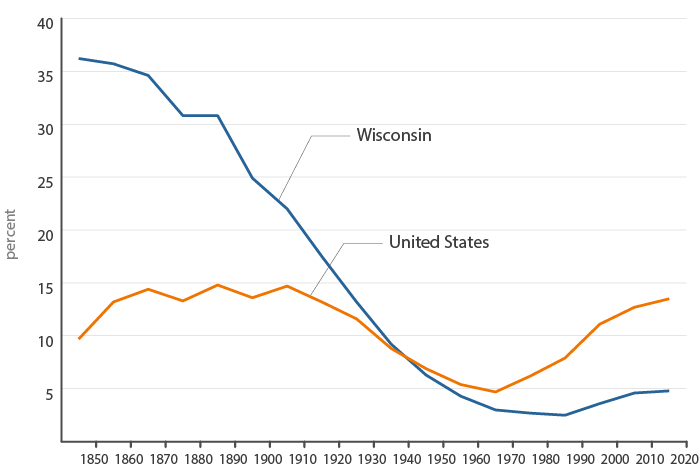 The foreign-born population is not evenly distributed across the United States or Wisconsin. Traditional immigrant destination states such as California, Texas, Florida, and New York have much higher concentrations of foreign-born persons as a percent of the total population than Wisconsin (Figure 8). 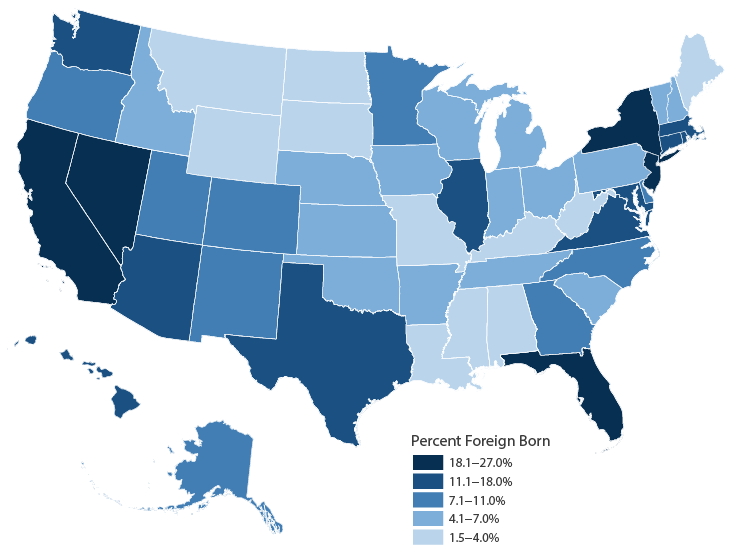 In some areas around Wisconsin, the foreign-born constituted a more sizable percentage of the population. At the county level, the highest concentrations of foreign-born, ranging from 6 to 9% of the population, were located in the southeastern portion of the state (Figure 9). 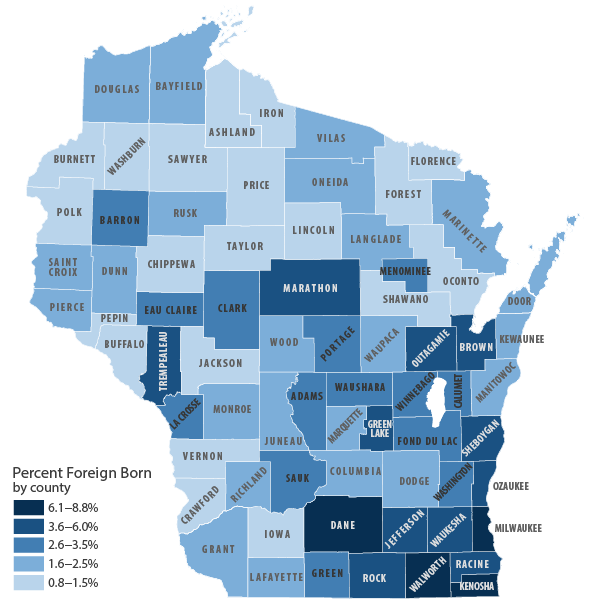 Higher concentrations of foreign-born people could be seen at more detailed geographic scales, such as census tracts. Fifteen tracts, mostly in Milwaukee County, had populations where the share of foreign-born was greater than 30% of residents (Figure 10). 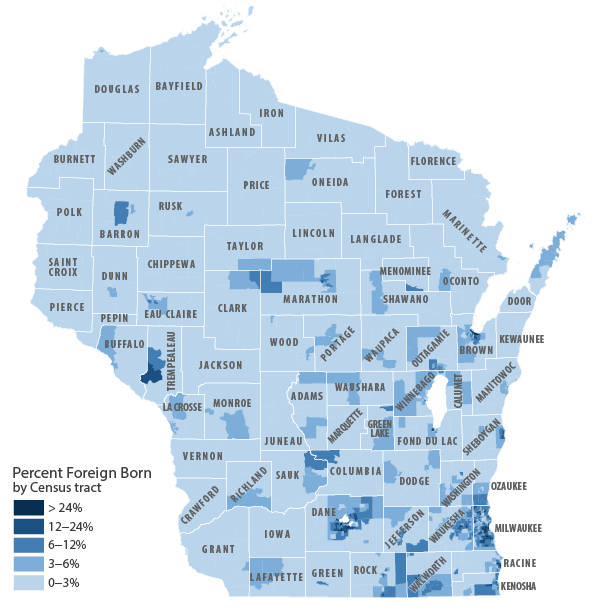 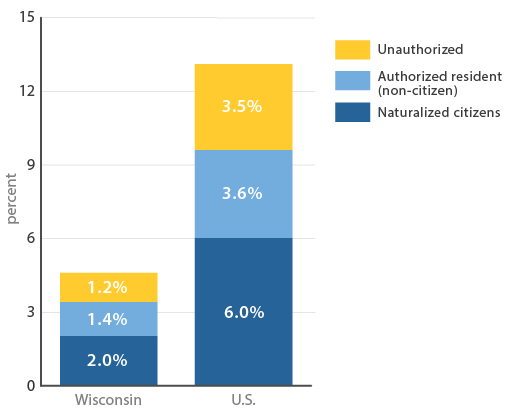 Unauthorized residents are particularly difficult to describe with reliable figures. Their legal status and other social factors make them difficult to enumerate with formal surveys. Although the Census and American Community Survey data products do not provide estimates of the unauthorized population, the Migration Policy Institute (MPI) provides rough approximations based on statistical models. MPI estimated Wisconsin's 2010-14 unauthorized population to be around 71,000 people with 74% being Mexican by birth. Combined with estimates from the ACS, the MPI figures suggest that unauthorized residents constituted about 1/4th of the state's foreign-born population and just over 1% of the total population (Figure 11).

As a share of the total population, Wisconsin's foreign-born has increased since its historical low in 1990, but proposed policies may further limit its growth. There have been several recent proposals to change who is authorized to enter the United States, the number of people who are authorized to immigrate, and to arrest, deport, and prevent entry of unauthorized migrants15. These potential changes to immigration policy and enforcement efforts at the state and federal levels may alter not only the number of foreign-born residents across the state, but their social characteristics and experiences as well. As such, they are likely to have far-reaching social and economic effects across the state for both immigrants and native residents.

Produced by the Applied Population Lab at UW-Madison on 11/20/2017 • Privacy Policy
The APL is an applied research unit in the Department of Community and Environmental Sociology.
Questions? Contact David Long.